The Gentle Philosophy of Dave Brockie and GWAR 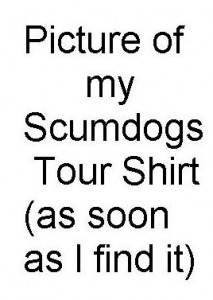 “Ghost in the Machine” is a phrase philosopher Gilbert Ryle coined to colorfully describe René Descartes’ mind-body dualism. Descartes didn’t just use the his coordinates for math. To him, mind and body were clearly on opposite sides of his plane, which was really just a re-work of Aristotle & Plato’s hierarchical spheres. The metaphysical can still transcend the corporeal, just with different math, possibly allowing for better co-mingling of the two.

You are probably familiar with The Police album or “Ghost in the Shell”, who borrowed this. 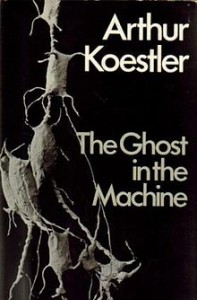 In 1967, when Dave Brockie was about 4 years old, Arthur Koestler released a philosophical psychology book called Ghost in the Machine, full title- The Ghost in the Machine: The Urge to Self-Destruction. Koestler argued that the mind was an independent entity from the body just visiting temporarily and didn’t always jive with the body. If this sounds a little religious, he took it one step further and created a model of a Triune brain (think: Father, Son, Holy Ghost). In the book, Koestler does a full review of modern psychology, then applies his thesis to explain why man’s entertainment and needs tend toward self-destruction, from drinking and smoking to atomic war.

By coincidence, 20 Years later, 43-Billion-year-old alien gods from the planet Scumdogia – banished to Earth for eating too many chili cheese burritos and making a mess of things – thaw awake in Antarctica. They see the state of the world (from a Sony Trinitron on Channel 5) and note human tendencies toward self-destruction and decide to help out (since they loathe humans anyway) as a rock band. Dave Brockie is the human slave/counterpart to lead throat-thing Oderus Urungus.

On the second album, during the first song, “The Salaminizer” (a wonderful partial re-work of N.W.A.’s “Gangsta, Gangsta”), when Oderus bellows, “Back on the Road, It’s no lie- stupid fucking humans pay money to die!” this is pure ‘Ghost in the Machine’. Or as Oderus told Joan Rivers in 1990, GWAR are merely “Satisfying a consumer need.” Beefcake the Mighty then told Joan that “killing” fans who gleefully throw themselves to GWAR’s death machines is a “microcosm of the Human condition.”

Of course this is way over Joan’s head, “What in the Hell are you talking about? Are you concerned about kids seeing fake blood and fake sex acts?”

Remember that GWAR were born right in the middle of Tipper Gore & The Washington Wives’ PMRC mess. The sorry, Gub’mint was making moves to tell Americans what they could or could not sing about, hauling rock stars in to testify before congress-

Senator: “Mr. Zappa, are you against labels on toys that say “for ages 3 and up?”
Mr. Zappa: “Well, yes. As the parent I can make that decision myself.”

OK, I’m paraphrasing but the testimony is out there and it’s freaking awesome entertainment, if you don’t consider the constant threat of overreach our Government always wants.

The congressional hearing had tremendous impact: 1000 bands immediately sprang up to test this bullshit as far as they could. Many of them used the subtle literary device called parody- and they loved nothing more than the fact that people didn’t get it.

As you would guess by their band name, Nomeanso have an interest in sexual politics (‘No Means No’ is the anti date-rape slogan). They sing gruesomely about it sometimes. This doesn’t mean they are celebrating the acts about which they sing. They do pre-date the PMRC.

Sargeant D., the character created by the Stormtroopers of Death, was their idea of a fascist to be mocked. To them he was a conservative (people forget that Tipper was not, and as usual, the liberals somehow get a pass on sharing the totalitarian culpability).  The Stormtroopers of Death wrote songs in the personage of Sargeant D. called “Fuck the Middle East” and “Speak English or Die” and your idiot press and politicians (and parents) were only too happy to assume that these were the views of the band members. They also thought that we, The Great Unwashed Fans were so stupid that we would be influenced by the overt messages. Performers were often arrested for obscenity for depicting these messages.  It was a little more intellectually sophisticated than Jim Morrison pulling out his dick, though not much.

The art world really had to fight for its life. It said, “Hey, we find your politics and business practices to be obscene. Don’t worry about a photograph of a guy with a bullwhip shoved into his ass. Why don’t we let parents police their kids and we’ll all police you!”

I never met Dave Brockie, but I can tell he was a sensitive, intelligent artist. He hated war, but was fascinated by it. He truly acknowledged and appreciated that he could live this life because his fans supported it. He was fighting against what he saw as societal ills. I wasn’t a giant, committed fan of GWAR, but I liked Dave as a person based on his anecdotal writing. I don’t use my Facebook page to follow musicians, really, but I always followed Dave, even before Myspace, because I loved his spirit, even when I disagreed with him. I love the spirit of “stupid and ridiculous” and “ridiculous to absurdity” which is exactly where GWAR took their conversation.

I really wish he had not died. I don’t think this death was on purpose. He has clearly been despondent since GWAR guitarist Cory Smoot died. After this, GWAR held concerts where you could bring a box of diapers for Cory’s newly-born baby and they would haul them back in a tour truck. Heavy Metal (and often Punk) people are the most loving, familial, and committed people you will meet. We have a special fidelity to each other that you don’t see in passing-fad music genre fan bases, especially since we were pushed back underground.

When only a few news agencies were reporting this and we still hoped it was a hoax, a friend of mine immediately noticed that we were a little too close to April 1, but I don’t think Dave could manipulate people that way after going through that with Cory. Now that the police, GWAR’s manager and major news outlets have reported, I guess it’s time to accept.

Dave offered commissioned art and for years I have dreamed of asking for a wall plaque “Cuttlefish of Cthulhu” (complete with brain testicles). I wanted to put it in my bathroom in a position that made you move to avoid it and prevent it from slapping you in the face. Dave claimed to be very poor at following up on stuff that was paid for and even posted that he is no longer taking commissions until he catches up. I don’t know if he just forgot to take the posting down or never caught up. So I never got to request it.

I also don’t even know if Dave made his own suits or Cuttlefish in recent years. GWAR is a consortium of sorts. They have a production company with many artists and sculptors. They could theoretically sell stuff in his name forever. I would never truly know if I have “his art” if I found some now.

Because of this consortium aspect, I hope GWAR go on. If I remember my interweb stories correctly, Dave wasn’t going to be the singer originally. The GWAR  slave we know as Hunter was. But Dave was fantastically charismatic and creative, and possibly (if you could imagine) a better singer. Then one day he suddenly owned the GWAR name because someone knew a lawyer (there are many stories on the interwebs- I read them passively, I promise).

It’s not time to think about this yet, but I think they could find another great spirit like Dave, whether he uses the Odorus character or not. There is no reason to throw away this great big beautiful world he helped create. There has to be someone in that mess of people  that can fill the giant foam shoes. If they can pull it off, GWAR will last forever, this will just have been the first dynasty. You can’t accuse them of keeping the characters alive to make money. Bands like this don’t make money. They performed the important task of pushing limits – not cheaply, but with humorous (if incredibly vulgar) absurdity, and we need them now as much as we ever did.

Here are some of my favorite Dave Brockie Moments:

His entire “Stupid” page on his website, which features my favorite photo:

GWAR, Me, and the Onrushing Grip of Death

It’s about the people and the city that gave GWAR life. How a bunch of pot-addled art-skool rejects rose from the rubble of an abandoned milk-bottling plant on a mission to make the world a filthier place and put Richmond metal on the map in the process. It’s the story of my life, and nobody is more qualified to tell that story than me.

This entry was posted in Music. Bookmark the permalink.