Random and disjointed thoughts about the impending release of Godzilla 2014

I just wanted a few thoughts out before the movie release Friday.

There is apparently a new Godzilla movie about to be released. I’m one of those fan-boys who is just sick about it.  Why, I don’t know. No other fictional character has been so sloppily treated, abused for money or had his/her story continuity disrespected more than Godzilla has.  I’ve been a fan since approximately before I had long-term memory. I guess that after all of the silly manipulations and transformations over the years, I still hope for a respectable release that honors the name. I am prepared for disappointment, though.

Rubber Suits and Monkey Suits and all Them Godzilla Movies

I’m not super educated about the creator, TOHO.  My understanding is that there was one Godzilla movie released in 1954. The subsequent multi-monster movies we all know and love were a different monster entirely called “Gigantis the Fire Monster” which was geared toward children and was sold to America as Godzilla. The second true Godzilla movie was released in 1984. At least this is the lore from which I presume.

I once read that Charlton Heston declined the opportunity to make a second Planet of the Apes movie because “everything that needed to be said was said in the first film. Anything after that is just a movie with actors in monkey suits”. With that in mind, while I have fond childhood memories of “Godzilla Vs. Megalon,” there only needs to be one Godzilla movie. Everything else is just a movie with people in rubber monster suits (now CGI).

TOHO were happy to jump that shark WAY before anyone was jumping sharks and Godzilla was re-invented 100 times much to the consternation of Sci Fi purists everywhere. Money must be made and now Godzilla, Planet of the Apes, Alien, Star Wars and Star Trek and many more once great adventure stories or valid philosophical statements made via the relatively new genre called Science Fiction are now just embarrassing.

This was not new in the 1960s.  Science Fiction started in Victorian times and pulp editors were forcing the authors to compromise their own creations for money well before 1900. Soon, pulp magazine editors were refusing long, slow-moving ambient stories and insisting on serials with cliff-hangers at the end of each segment to keep people coming back to the newsstand.   If you had a character of your own creation, it had better morph into Flash Gordon or Tarzan pretty quickly if you want to get published.   However, pulp authors were dirt poor and exploitable. George Lucas was a Bajillionaire, THEN he sold out and ate his young.

Godzilla is a metaphor for (acutely) Atomic war and (obtusely) “abusing/meddling with Mother Nature”. Supposedly, Godzilla was created or awakened and possibly mutated by the atomic bomb testing at the Bikini Atoll that occurred starting in 1946.  Godzilla’s skin texture is the same as the raised keloid scars on survivors burned by the Hiroshima/Nagasaki blasts.

In any real Godzilla movie, Godzilla can never be truly killed. It must always regenerate someway, somehow until we stop creating Godzilla metaphorically. The surer we are that we have destroyed it, the surer it will reappear to our astonishment and incredulity.  Godzilla is not good or evil, but instead is pure irresponsible destruction; nature out of control as a result of man’s hubris. This is, in my opinion, a valid modern theme and worthy of at least a few minutes of contemplation.  Godzilla is innocent.  We are not.

I tell people that I married my wife because she knew to cry at the end of Godzilla. You should cry at the end of Godzilla. The whole damn mess, our destruction and this animal’s creation and messy physical death is our fault. This is a very real, terrifying and and heavy existential consideration for Japan (the validation of their victim status not considered here).  I stopped attending Godzilla 1954 in public viewings because I want to murder the guy 3 rows away guffawing at the 1954 special effects while I’m having heavy thoughts. Have a moment of introspection as a member of a civilization, you slug, of course it’s a model helicopter.

Speaking of primitive movie special effects and bargain-basement costuming, the earliest Godzilla had a long, dead, vacant frog stare. I prefer this.  It doesn’t see its feet, only the horizon.  Godzilla doesn’t notice the people or buildings in his path any more than an alligator notices the anthill he slides through while slipping into the water. A hurricane doesn’t see trees uproot.  We don’t bother him much more than the apoplectic bees swarming a bear while she casually eats their honey.

My fear is that this movie will attempt to make Godzilla menacing. It looks pretty angry in the stills I’ve seen and I don’t think he should. I appreciate Godzilla depicted as a frustrated animal in a confusing environment lashing out and therefore elevating destructive power (vis–à–vis Kong), but I will not be surprised if they make Godzilla “angry” in some anthropomorphic SNAFU. Having to fight other monsters can only further this. If I learned anything from the latest King Kong, no emotional manipulation is beyond Hollywood.

For the reasons stated above, I do not agree with this being a multi-monster movie. Any added monster is a cash-in.  I could be persuaded into being lenient here, but only if the other monster’s origin story is as relevant or cool as Godzilla’s.  I just know (I just know) that this “Muto” thing they intend to introduce is going to be just plain stupid (starting with the name). The pictures I am now seeing of the Muto toys being released before the movie look like typical Hedorah-era TOHO cheese. But, just like in the Jazz Age, the (anti) hero’s many travails = serial publishing = $$$.

Sorry to make up my mind before I go in, but I am convinced that modern movie makers are incapable of creating interesting original material. I suggest they just keep re-hashing old material and try to be respectful.  I will try to keep an open mind but I demand respect as an old fan. I’m also not too sure about the music in the commercials that sounds like it was written by the monolith from 2001: A Space Odyssey, while I’m complaining.

I’m all for the “Re-balancing nature” theme.   “History shows again and again how nature points out the folly of man” and all that.

Their “opponents” are not actually trying to destroy nature or sell it out.  We all want our nature to be pure. We’ll just argue about what is within normal limits of our affect and how to control that. Of course concern for “the environment” belongs to no single group of people more than another any more than, say, “family values” does. It’s just another thing we’ve been taught to fight about and look to the Government to fix for us.   I certainly hope pop culture partisan politics will not pollute this awesome piece of cinema that also belongs to us all now. Think Hollywood can do that? 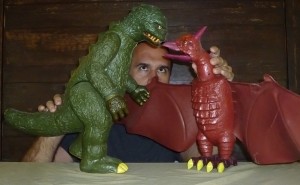 This entry was posted in Random Blather. Bookmark the permalink.