Happy Saturn Day in your season of Saturnalia! 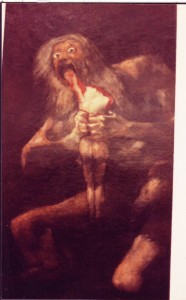 I took this picture at the Museo Nacional del Prado in Spain. It is Goya’s “Saturn Devouring His Son” one of his “black paintings” that filled his “la Quinta del Sordo”. This was taken before one of the photography professors at Lakeland Community College taught me: “Don’t take pictures of famous things; if you want a record of your visit to the Washington Monument, buy the postcard. Otherwise, put grandma in front of it then take a picture. I am not so much a photographer as a record-keeper, though I think I have composition skillZzz. Just not here.

Every once in a while on Facebook, I have the saddening experience of watching some stooge who can’t intellectualize his way out of a paper bag try to discredit 10,000 years of all of the religions of the world because he saw a post on the Richard Dawkins feed. You know the type- they get all of their info from John Stewart’s demagogeury and Pop Culture T.V. Scientists.

I’ve seen religion dismissed as fairy tales wherein people try to explain things in nature they don’t understand. Superstitious fools who think thunder is Zeus throwing lightening bolts. I (foolishly, egotistically maybe) try to explain to them that no one ever really thought that. No one actually thought the sun was a guy in a chariot. No one thought the world was encircled by a snake. I explain that these are exoteric symbols that communicate profound esoteric philosophies that actually still shape our lives today.

Here is the bad news for Christians- this will actually be the death of your religion. Since about AD 300 Christianity has accepted the trappings of the very religions, occultism and idols your Bible says to hate and mixed them with your theology, then smugly declare yourself saved. I will remind you that it’s not “the serpent who fooled the whole world except the good ‘fill in your denomination here‘.”

It’s “the serpent who fooled the whole world”.

The serpent, you’ll find is symbolic of knowledge that comes with ego and hubris that causes you to disregard your creator. For about 130 years, the notion has been floating around that Christianity is just another iteration of the Sun religion that seems to be the root of every other religion. And with modern Western popular religion-this is true. Modern Mary is Ishtar. She is Aphrodite, Inanna, Demeter, and Isis.  Jesus is thought to be merely an avatar of the Piscean age and a copy of Horus, Mithras, Krishna and Dionysus. And when the intellectuals come to shut you down, you will be too ignorant to fight their argument or may become convinced yourself. Watch the first 3rd of the movie Zeitgeist. That movie was written in 1880 by Helena Blavatsky (it’s actually a book available free on Archive.org).

In the 1920’s Manly Hall started lecturing on ancient as well as Blavatsky’s modern occultism and everything in between. Though he died in 1990, he is still probably the best source on this subject.  If you are a Christian, Hall can prove your religion a sham for 8 hours straight.  Can you refute him intellectually?  It is possible but you have to admit that your God of Christmas and Easter is not legitimate.  And you would have to actually read a Bible.

As an aside, Ronald Reagan wrote most of his own speeches and spent the years between Governorship and Presidency producing little audio essays to broadcast on radio. In his writing/speeches, he occasionally quoted Manly Hall without credit. Now, Hall was a 33rd Degree Freemason and so was Reagan (possibly only Honorarily). We are talking about religion here, not conspiracies. Once Napoleon shit-canned the Pope in 1798, the Masons no longer had to be underground and started writing books. “We now know that Freemasonry viewed doctrinally is Theosophy,” W. Hoste wrote in 1921. All I’m saying is: Reagan’s little star-gazing habit may be bigger than we thought, especially when one considers his penchant for mentioning alien invasion.

Following is a portion of Manly Hall’s lecture entitled “Astrotheology” which I have painstakingly transcribed for you from a Youtube video. If you know of an existing transcript, PLEASE let me know about it before I do something stupid like finish the series. It gives a little insight into the ideas behind Saturn (and his analogues throughout the religions of history) and does NOT involve the throwing of thunderbolts (well, except for a little poetic murder). But you will hear a lot of ideas that permeate modern New Age thinking including that of so-called atheists, whom I find to embrace a lot of New Age concepts that are based in that old Sun religion.

Or listen along to it on Youtube as you read. Turn the page when you hear the tone.

…It is curious that in the evolutionary process it is not the personal life of man but the psychic life which must be saved. It is not the individuality but the universality in man which is important. This must be brought ultimately and finally to its total liberation. So we have these orders of ancient planets. And we go back to our Greek system and we find several things that are of great interest to us.

In the Greek theology, for example, we find that originally the great god was called ‘Heaven’. And this god was called The Great Father God. And he was Uranus, the sky deity. And this sky deity rules supreme or a great period of time. And then his kingdom was taken from him by Saturn. And Saturn in turn, lost his kingdom to Zeus. And Zeus, in order to save his kingdom and to make possible its ultimate regeneration, fashioned in a Mystery and carried in a golden thigh bone the mysterious infant child Zagreus or Dionysus who was to be the radiant personification of the God himself. This deity Dionysus was for the salvation of the world. Now let us see what this all means when we start to develop it.

“We see then that Heaven, Uranus, losing his kingdom to Saturn is the beginning of Generation. This means the first orbit within the great mystery of the sky itself. Saturn was the ancient one- the old god, Chronos. And for some mysterious reason, the ancient named the outer orbit of the Solar System in honor of this deity, placed the symbol of Saturn as the sign of The Ancient One, Chronos or Time and made this god the devourer of his own children. And Saturn, in order to preserve his kingdom, destroyed his children by eating them as rapidly as they were born.  But finally the wife of Saturn substituted a stone for one of the children and thus deceiving the god,  Zeus was permitted to live. And Zeus in due time, took over the kingdom of his father and fulfilled the ancient prophecy that was written in space. The legend here is rather obvious. Saturn is Time.

Time devours its own children. It devours everything which is engendered within it. Nothing that is born in time or of Time can survive Time. Therefore we have here a problem in substitution.  By a subterfuge, something that is timeless was introduced into the pattern of time.  And in this way, Saturn was outwitted to produce out of itself or from itself the deity Zeus, or Jupiter.

Now let us go for a moment and remember our ancients were not concerned with mere physical phenomena. What did Saturn represent? Saturn represented to the ancients supreme wisdom. Saturn was the ancient power that must ultimately also devour everything left in itself. Therefore all things that are born from wisdom must ultimately be devoured again by wisdom. This was the strange, abstract, contemplative wisdom of meditation. This was meditation from which things are born but to which all things must return again. This was a kind of consciousness which engenders, by holding and possessing all this forces and things which it has created to return to itself again and be dissolved. So Saturn representing the beginning of creation also becomes the symbol of death. For everything that is created must die and everything that is born of the race of the Völsung in the Nordic mysteries is destined to the tragedy of the Götterdämmerung. All the heroes of the world must die because they are the progeny of death. So anciently, Saturn or Chronos was represented carrying the scythe of death. Sometimes represented as The Reaper. And often as an aged person, often as a skeleton. Saturn was then the devourer-the Ultimate. Saturn was the beginning of motions which in themselves must end. Saturn was the beginning of separation which is itself a supreme illusion and must lead ultimately to the end of its own existence. So Saturn plays many parts, often apparently in complete conflict with themselves.

But always there is one underlying principal underneath. And that principal is that Saturn is strangely both beginning and end. Saturn is the hope and the end of hope. Saturn is death and Saturn is everlasting life depending upon the direction of the motions. For the ancients believed that from the rings of Saturn, souls were cast back into the Empyrean, or space.  Saturn is the graveyard of all things. But it is destined according to the Chinese that one day all the Earth shall one day be a graveyard. Everything that is mortal comes under the power of The Saturnian Principle. That is the absolute tyrant.

And yet by another mystery, one child escaped the destruction. One child could not be devoured by the god. And what was the symbol of this child? Why did Zeus survive? This is a very interesting and knotty problem in Greek philosophy and Greek Metaphysics. But it seems that Saturn gave birth out of himself to one principle that could defeat himself. And the nature of this principle we have to find in the very processes of contemplation. For in the meditational Mystery, there is in the state of illumination that power which can escape death-the power that is born of death but comes to eternal life. There is in the composition of all things that which is born but can not die. This mystery is the mystery of the soul itself.  For the soul is the only thing that has a beginning in Time but an eternity of continuance. So it was the Greek concept inasmuch as the soul outgrowing the mystery of life was alone capable of the experience of immortality.

Zeus survived the strategy to destroy him and in time became the master of the kingdom. Now Zeus at this stage represents the infantile aspect of the soul. The soul in its, we will say, in its potential, not in its potency. And Zeus becomes a kind of autocrat. Zeus becomes a very tyrannical thing because he is the symbol of imagination and because he has to do with the dream of creation. And from Zeus in his dreaming and his Mystery, there come forth certain principles and powers. And one of these principles or powers is the horned Zagreus which is carried within his father’s thigh, the mother being summarily having been destroyed by thunder bolts. And this horned deity is Mars. Now Mars, therefore, is the next in our order of descending planetary orbits from the sphere of Saturn. And Zagreus in turn is Mars or the dynamic energy of the Titans or the Titanic powers which forced the world into existence. And the power of Mars is the power of will. Therefore out of the experience, out of the Mystery of imagination, out of the creative potency of Zeus, comes the symbol of will. Will as the directing force by means of which worlds are brought into manifestation and by which the objective life of man is maintained.”

End Transcript.~Jimm
This entry was posted in Religiosity and Philosophizing. Bookmark the permalink.